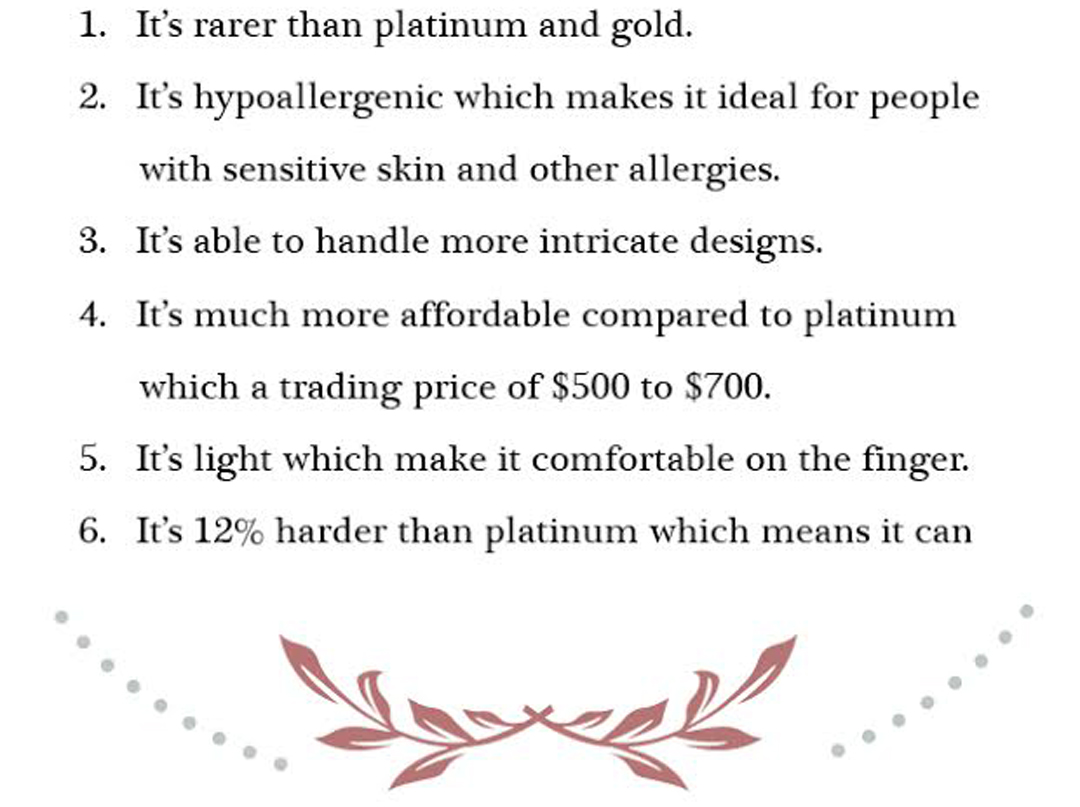 Palladium wedding rings make for the ideal choice for people with sensitivities. The metal is harder, more durable and simply exquisite. If you’re looking for a ring with a little something different, consider palladium.

This naturally white precious metal is a part of the platinum family. It is a chemical element discovered as far back as 1803. Palladium isn’t only far rarer than platinum or gold; it adds an incredible style and flare to any item. You can find stunning online wedding rings made with palladium.

Palladium became a popular metal for jewellery in 1939. During the 2nd World War, platinum was required for the war effort but in numerous countries it simply wasn’t available. That’s when palladium rings became the perfect alternative.

The metal is hypo-allergenic so it is ideal for people with sensitive skin and other allergies. While palladium is much stronger than platinum, it’s a lot less dense.

Why A Palladium Ring and Not a White Gold Ring?

Many people have chosen white gold online wedding rings as they simply wanted a precious metal in white for their rings. But white gold actually isn’t a true white metal. Gold is yellow when it comes out of the ground so to get, let’s say, a 14 karat white gold ring, for example, about 5% of pure gold is taken and the jeweller mixes that with metal alloys that are white, such as nickel. The process helps to bleach the metal. So white gold is definitely not a true white colour the way palladium is.

The final step before a gold ring is placed in its showcase in a store is that it is rhodium plated. This plating process makes the ring look white or platinum. Think of it like the way a car bumper is chrome plated. However, rhodium plating wears off after time, and flecks of the yellow gold may show through. You can have the ring re-rhodium plated or you can opt for stunning palladium jewellery that requires little maintenance and will stay white forever.
While white gold rings have a small amount of nickel in them, palladium has absolutely no nickel, making these online wedding rings perfect for those with nickel sensitivities.

While white gold rings are available in a couple of different purities (18 karat gold is 75% pure gold and 10K is 41% pure gold, for example), palladium rings are far more precious than their white gold counterparts.

What’s more, palladium online wedding rings are able to handle more intricate designs. So if you would like filigree details on your ring, palladium is the way to go. Value also needs to be considered. While the price of a single ounce of pure gold is double the price of palladium, the latter is a lot rarer. So a palladium ring is an all-round wiser investment.

Why Not a Platinum Ring Instead?

Platinum, like palladium, is also a precious metal that is naturally white in colour. Palladium does belong to the platinum family. So what’s the big difference if they’re both hypoallergenic and naturally right? The price, of course.

At one point, for example, the New York Spot price of platinum was more than $2100 per ounce and over the past few years it’s traded around $1500 to $1700. But during this same time period, palladium has been trading in the range of $500 to $700. That means that platinum online wedding rings are going to cost you a whole lot more than a palladium ring of a similar design.

Another big difference between the metals is density. Palladium is pretty light so a wedding ring made out of this material will be incredibly comfortable and light on the finger; whereas platinum is incredibly dense and will feel heavy and even cumbersome.

Platinum is a really soft metal so it bends, gouges and scratches easily. But palladium is as much as 12 percent harder meaning it can keep its perfect finish for much longer and won’t scratch so easily. Overall, a palladium ring makes for the ideal investment.